Delve into the roots of one of America’s most famous families and discover the top 5 facts about the Kennedy’s in Ireland, from their ancestors to their political work.

The Kennedy’s are perhaps the most iconic and well-known Irish American and Catholic family that have tasted political power and prestige in the United States of America. They once set the political standard, and their legacy runs deep in both Irish and American history.

To this day, the Kennedy name still evokes a deep reverence and respect on the Emerald Isle. There is a pride in the country that the first Catholic President of the US has direct Irish ancestry.

The tragic story of the Kennedy family is known the world over, but you may not know everything to do with the clan and their links to Irish soil. Read on to discover the top 5 facts about the Kennedy’s in Ireland.

The first on our list of the top 5 facts on the Kennedy’s in Ireland is that the first generation of Kennedy’s and Fitzgerald’s who came to the US from Ireland in the 19th century suffered from the widespread discrimination directed toward Irish Catholics at the time.

They started off in Boston as peddlers, coopers and common labourers. However, by the close of the century, Patrick Kennedy and ‘Honey Fitz’ Fitzgerald’, JFK’s maternal grandfather, had become powerful Boston politicians.

On display in the John F. Kennedy Presidential Library and Museum is the Fitzgerald family bible that was brought to the US by Kennedy’s ancestors. The Kennedy’s have ever since been a prominent family.

4. JFK’s sister was Ambassador to Ireland – one of the top facts about the Kennedy’s in Ireland

Jean Kennedy Smith, who passed away in 2020 aged 92 and the sister of both John F. Kennedy and Robert F. Kennedy (whose wife was Ethel Kennedy), served as Ambassador to Ireland under President Clinton from 1993-1998.

The US Embassy in Dublin noted how Ms. Kennedy “played a pivotal role in the peace process”. In her final speech to the Embassy, she said; “Though I am leaving soon, I am not really going away because my heart will always be here”.

3. President Kennedy visited Ireland in 1963 – bringing the White House to the Emerald Isle

Just five months prior to his assassination, President John F. Kennedy made a state visit to Ireland in June 1963. On a visit to Limerick, he said; “This is not the land of my birth but it is the land for which I hold the greatest affection”.

The President also provided a stirring address to the Dáil, the Irish Parliament, in Dublin before departing from Shannon Airport. He had earlier arrived from Berlin following his famous “Ich ben ein Berliner” speech.

Later in Irish history, in 1967, President Kennedy’s wife Jacqueline Kennedy visited Ireland with her children for around a month.

The Good Friday Agreement was signed at the end of the 20th century in April 1998 to ring in a new era of peace in the North of Ireland following a 30-year-long conflict. On 7 December 1998 a special John F. Kennedy Profile in Courage Award was presented to eight political leaders in the North.

The presentation of the prestigious Award to non-Americans was at the time an unprecedented move, illustrating the import of the situation and the links the Kennedy name still held with Ireland.

The recipients were; Gerry Adams, John Hume, John Alderdice, Malachi Curran, David Ervine, Gary McMichael, Monica McWilliams and David Trimble. This is one of the top facts about the Kennedy’s in Ireland.

1. Irish ancestry from both sides of the family – a true Irish connection

The Kennedy’s that reached the highest of political corridors of the 1940s, 50s and 60s can trace their Irish ancestry through both sides of their family history. We often hear of the abbreviation of ‘JFK’ for Jack Kennedy, which in full is ‘John Fitzgerald Kennedy’.

The Fitzgerald family were born in the rural County Limerick village of Bruff, who left Ireland during the Famine and moved to Boston. John Francis Fitzgerald, JFK’s grandfather, was born to a Limerick father and Cavan mother in the US on 11 February 1863. His daughter, Rose, was JFK’s mother.

On the Kennedy side, Patrick Kennedy migrated to the US from Dunganstown in County Wexford and married Bridget Murphy, a girl from Owenduff in County Wexford. Their youngest child, Patrick Joseph Kennedy, was JFK’s grandfather.

Then, in November 1887, Patrick married Mary Hickey, the daughter of a Corkman, and their son, Joseph Patrick Kennedy, was JFK’s father. As you can see, Irish blood ran through the veins of the Kennedy’s from all possible directions. 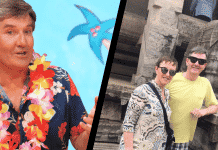