The results of a recent poll carried out on behalf of the Irish College of Dialectology has found that the local Belfast phonological accent is considered to be the most pleasing and sexually sounding to the ear and the most terrifying at the same time among five-thousand listeners who were polled.

Chairman of the Irish College of Dialectology Professor Claude Merryman announced the findings at a specially convened meeting of Fellows of the College late last night.

“It’s very rare indeed for one local accent to be voted number-one in two categories,” the Professor told his audience and members of the press who had gathered to hear the much-awaited results of the vote.

Professor Merriman explained: “We have always been aware that accents and local dialects can arouse emotional responses in the listener. But to find an accent that arouses two polar emotions at the same time is quite unusual, in fact, we have never come across this phenomenon before.”

Dr Merrryman was born and raised in one of the tougher housing estates in the North Dublin suburbs before getting an online diploma in dialectics then bull sh****g his way into the fancy job he has now.

“I’m shagging astounded at the way those gobshites voted the Belfast accent as sexy and shagging terrifying at the same time. In all fairness, I blame Sinn Féin,” said Dr. Merryman, palbably angry that the North Dublin accent didn’t win.

One reporter present asked the professor as to how a political party could be held responsible for the popularity of an accent, pointing out that almost the entire city speaks this way.

“It’s all the fault of your-man Gerry Adams, so it shagging is,” the professor answered. “You see, years ago during ‘The Troubles’ in the North and before Sinn Féin became the ‘saviours of the human race,’ Adams and the rest of the Shinners were banned from the radio and TV.

“Now, as most of the Shinner spokespeople were from Belfast, the accent, when it was heard, took on a sort of a mystique all of its own. People around the country hadn’t really heard it before, so it sounded sort of new and sexy, so it did.”

No surprise it’s terrifying too

“Add to that, when you remember that the Shinners were the ‘political wing’ of the you-know-who, it’s not surprising that the fecking accent also became shagging terrifying at the same time.”

The professor went on to elaborate; “Every shagging film ever made about ‘The Troubles’ had its fair-share of Belfast accents. It’s all you ever hear now and, unfortunately, it’s a favourite amongst the Irish people.”

Meanwhile in Ireland understands that the winners in other categories were as expected. The ‘meanest accent’ went to Cavan, the ‘most dim-witted and unintelligible’ went to Kerry and the award for the accent ‘Everyone Tries to Emulate’ was awarded to South County Dublin. 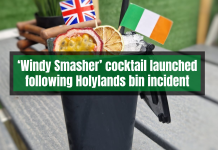