As a nation known for its love of tea, the method of making the perfect brew is a very touchy subject in Ireland.

A British professor has caused a stir claiming that the Irish make tea wrong.

The Chemical Engineer performed a study on how to make the perfect cup of tea and came to the conclusion that most of us have been doing it wrong.

So, the next time you’re making a brew, you might want to check out the correct scientific method to see if it improves your experience.

Dr Andrew Stapley is a Chemical Engineering professor at Loughborough University. Specialising in food sciences, Dr Stapley has worked alongside big companies, such as Weetabix and Cadbury.

In his latest research, Dr Stapley looked into the ideal method behind making the perfect cuppa. Much to our surprise, the British professor discovered that the Irish do, in fact, make tea wrong.

So, if you’ve felt like something has been lacking from your cup of tea, we might just have the answer.

Most of us make a cup of tea by heating the teapot with boiling water before rinsing it out, adding tea bags, and then more boiling water.

After this, we normally give it a stir, so the tea flavour fully infuses the water before pouring it into our preferred cup. It is once the tea is poured into the cup that we will add the milk.

If this sounds like your usual method of making a cuppa, then you may be shocked to discover that you’re doing it wrong.

After conducting his research, Dr Stapley found that pouring the milk into the hot tea causes the milk to heat unevenly.

This, in turn, causes the proteins in the milk to change their natural state, which then causes the small white residue to float at the top of the cup.

Not only is this unpleasant to look at, but this ‘denaturing’ of the milk proteins actually causes the tea to lose some of its flavour!

Dr Stapley suggested a new method for making the perfect cup of tea that might horrify Irish people, but please bear with us.

How to make the perfect cup of tea – a contentious issue

Concluding that Irish people make tea wrong, the British professor revealed an alternative method for making the perfect cup of tea. However, it may cause shock horror among Irish tea lovers.

According to Dr Stapley, the perfect way to make a cup of tea is by pouring the milk in FIRST! We’ll let you have a moment of shock here before we continue.

Justifying this method, he revealed that by pouring the milk into the cup before the hot water, you could help prevent ‘hard water’ by lowering the water’s mineral content.

Following this method, you should be able to enjoy the full flavour of your cup of tea. However, we’ll leave it up to you to decide how you make your perfect cuppa.

The only question from us is, what is the perfect biscuit to go along with your cup of tea? 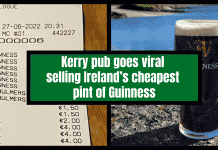