A joint British-Irish governmental plan to impose a ten-euro charge on cars crossing the border between the Republic and Northern Ireland has been revealed.

Large scale opposition has been proposed after plans to introduce a €10 toll for motorists crossing the Irish Border were leaked today.

The leak — believed to have originated from an official Downing Street Twitter account — outlines both British and Irish governmental plans to impose a ten-euro charge on cars crossing the border between the Republic and Northern Ireland.

It is understood the toll will come into effect in the event of a No-Deal Brexit.

The toll is said to have the full backing of both governments.

There are 275 border crossings between the Republic and the North. An estimated 2235-million vehicles cross the border on a monthly bases. The toll will apply to trucks, cars and vans.

At a joint governmental press conference, spokespersons from both governments were asked to confirm the plans.

Finbar O’Reilly Chief Irish Negotiator told the press. “This is a new sort of cross-border initiative.” He said.

“There are those within both civil services who see beyond the doom and gloom of Brexit. Those who can see outside the box and grasp each and every opportunity — sort off making the best of things.” He continued.

Clive Dudley-Jones, of Downing Street, added, “Looking at the totality of vehicles crossing the border every month we conservatively estimate a twenty-three-thousand-million-euro gross income per month to be shared equally between both countries. That’s eighteen-thousand-million for us and five for Paddy.” He concluded.

Irish spokesperson O’Reilly added. “Shur that would be grand, look at it this way.” He told reporters. “Politicians on both sides of the border are getting their knickers in a twist over Brexit.

“Like really, it’s not such a big deal. Politicians need to keep in with the people whereas us civil-servants don’t have to give a feck. It all comes down to making a few bucks.”

Right in the Middle of Someone else’s Country

Responding to questions from the press as to what exactly the money would be spent on. Clive Dudley-Jones responded.

“Well, it’s not exactly inexpensive running a border right in the middle of someone else’s country — I suppose some of the money will go on that and the rest on expenses” he said.

Irish spokesperson, O Reilly added. “We got over all the political opposition to the border toll easy enough.” He said.

“As for Fine Gale and Fianna Fail, well, to be honest, they actually don’t care as long as it makes a bit of cash. As for what we’ll spend the money on — well, we’ll probably do the usual, promise more housing, schools and hospitals. But to be honest, most of it will probably go on expenses as well.

As we go to press, no cabinet spokespersons were available for comment. It appears the Taoiseach and Prime Minister along with fifty-five members of both Parliaments are on a fact-finding tour of toll-roads in the Caribbean. 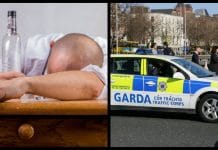