Fans of RTÉ’s The Den are mourning today following yesterday’s announcement that the show will not be continuing for a second season.

The Den has a special place in the hearts of many growing up on the Emerald Isle.

The popular children’s TV show ran from 1986 to 2010 but was brought back during 2020 at a later timeslot, much to the delight of people who grew up during this time.

Unfortunately, fans of The Den have been left heartbroken following the cancellation of the beloved show.

People who grew up between 1986 and 2010 rejoiced last year when Ray D’Arcy, Dustin the Turkey, and Zig and Zag returned to our screens on Sunday nights.

Old school fans of The Den were delighted to share their favourite show and characters with their children. Families often engaged with the show, connecting with Dustin and the gang via Zoom to compete for prizes.

RTÉ delivered the statement on Tuesday, saying, “The return of The Den to our screens was a huge success on RTÉ One. However, there are no plans for a new season at this time.”

This came as a shock to fans, considering that Ray and Dustin had announced the show would be returning after Christmas. The Den stars made the announcement on D’Arcys Radio One show back in July, delighting fans across the country.

While fans have been left confused after these two conflicting announcements, RTÉ has said they will say no more on the matter.

The return of The Den in 2020 provided the nation with a glimmer of hope, sharing some joy during a very dark period. It offered families the chance to bond over a shared love at the end of the week on Sunday nights.

Children rejoiced in Dustin’s cheeky attitude. Meanwhile, awaiting the arrival of the evil Ted, who all The Den fans know had unfinished business with D’Arcy and the gang.

Tributes – outrage and despair flooding in from fans

Fans of The Den have been left heartbroken following the cancellation of the beloved show.

Viewers have been rampant on Twitter, despairing over the news.

One stated, “Ridiculous decision! I mean they have nothing to put on at that time that will generate the viewing figures the show got last year”. According to statistics, the Sunday show reached record viewing figures.

Another fan said, “So disappointed. It was brilliant sharing a piece of my childhood with my own family, something we could all watch together for a good old belly laugh. Big mistake… HUGE!”.

Many other fans are heartbroken for their children, saying, “I don’t know how I’m going to tell the kids. They were so excited about it coming back.”

There are hundreds of tweets containing similarly disappointing outlooks on the decision. We hope RTÉ reconsider and bring the gang back on some level. Personally, we can’t help but think Ted had something to do with this cancellation. 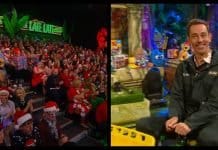