We here in Meanwhile in Ireland are crazy about good Irish comedy and craic and one of our favourite Irish sitcoms has to be Father Ted. It just seems to take the Irish sense of humour that one step beyond the normal humdrum of chewing gum productions that occupy prime-time TV.

Having a variety of strings to his bow, Joe also played the gormless Timmy Higgins with Pat Shortt in the RTÉ television comedy Killinaskully, which ran for five series. He also wrote on the fourth and fifth series of that popular Irish sitcom.

Question: Joe, can you tell us some behind the scenes secrets from ‘The Old Grey Whistle Theft’?

Answer: “Yeah, in the external Clare scene where Fr Damo and Ardal O’Hanlon, who of course played Dougal, were supposed to be very much in the background as Ted and the local guard were chatting at the front door.

“Of course, Ardal and I being the messers that we are, decided to upstage Dermot Morgan and steal the scene by putting on a display of fairly good football skills.

“That sequence was never originally in the script but both of us had played soccer in our youth and Ardal had been very good at it so we put on a display of ball-skills and simply stole the show. That scene was left-in in the final edit.

“Another thing is that Father Damo’s hand, which is seen robbing the whistle, is not, in fact, mine. It would have proved too expensive to fly me to London for just that one scene so a ‘body double’ hand was used.

“Another thing is that when Father Frost calls in vain for Damo to “come in for his tea”, the voice is that of writer Arthur Mathews, which was dubbed in later.”

Q: Who were your favourite actors on the Father Ted set?

A: “Oh God, that’s a difficult question. Everybody involved in the production was friendly, professional and easy to get on with. I would single out Ardal O’Hanlon as being particularly ‘good craic’.

“The writers’ Graham Linehan and Arthur Mathews were exceptionally helpful and friendly to me and the rest of the cast and crew.

“I was initially in awe of working with Dermot Morgan and Frank Kelly who were very much established actors at the time but they soon put me at ease while filming in London. One day Dermot took a large group of us to watch Chelsea play. That was good fun.”

Q: Where You typecast as Father Damien?

A: “There is a bit of me there. They were very good at that — casting. You’ll find that with a lot of the actors there was a bit of them in the roles they played. Michael Redmond who played Fr Stone is a bit like that and Patrick McDonnell who is a good friend of mine and played Eoin Mc Love is a bit like that in real life.”

Q: How long did it take to film that one particular episode?

A: “Well, all the outdoor scenes were shot in Clare first, then about a month later they brought me over to London. There would be about five days of rehearsals for the cameras and stuff. It was shot in front of a studio audience at the London Studios in Waterloo Central London.

“The audience could watch the Clare scenes which were shown on a large screen and then we would perform the indoor scenes. There were of course retakes of scenes — Dermot Morgan wasn’t the best at learning his lines, to be honest.”

Q: Do you miss Father Ted?

A: “Well, I only ever did that one episode but I didn’t think I’d be talking about it all these years later. I only saw it as a few weeks work but when you’re shooting something at the time we didn’t think it would be that funny.”

Q: Which do you prefer, stand-up or television?

A: “That’s a good question. I haven’t done stand-up now in three or four months and I thought I would miss it but I’m actually not missing it.

“I think I’d prefer television or film, but in stand-up, you have more control. In television, there are so many people involved to give you the final OK – it’s more difficult.”

Q: Outside of Father Ted, who would be your favourite comedians be?

A: “I like Lewis K, he’s very controversial but he’s good. And Chris Rock, I like him. I think with stand-up, America are the best but on our side of the Atlantic, we’re better at sketches.”

Q: Do you think RTÉ made a mistake in not taking-up Father Ted?

A: “Ah No! That’s a myth. RTÉ were never offered Father Ted.”

Q: Did you do any formal acting training?

A: “Ah no, no, — as you can probably tell. I did do a short course for a few weeks on acting for television, but that’s about it.”

Q: Were times different then concerning censorship and getting scripts past TV executives? Would Father Ted get away with it now?

A: “There was a lot of stuff in Father Ted and when I look back at it I wonder would they get away with it now. There’s one scene where Fr Jack is remembering when he was teaching in a girl’s school and he say’s “it’s too hot, you’ll have to take off your tops.” And of course, the episode where Ted is accused of being a racist — I’m not sure you’d get away with that now.”

Q: Do you think that, because of the pandemic, that comics and comedians have a valuable role to play in society — by lifting people’s spirits?

A: “Oh, I don’t know — it’s not for me to say. But yeah, we have a role to play. It’s scary not just with the pandemics but when you think about what’s happening in the world right now you have a lot of right-wing idiots taking to the world’s stage right now.

It is really weird. It’s kind of a big shock to people’s mental health. You kind-of say is this really happening? You have to stay in for two or three months and it is weird.”

Father Ted is one of Irish and British televisions most successful and critically-acclaimed sitcoms. It is listed as number 50 in the BFI’s list of 100 greatest British television progrms and in 2012 it was voted number one by viewers in Channel 4’s Thirty Greatest Comedy Shows.

You could never imagine that a story based on three odd-ball priests living on a rock out in the middle of the Atlantic would form the basis for a tremendously popular and funny sitcom — but then that’s show business.

Our thanks to Joe Rooney for giving us his time. 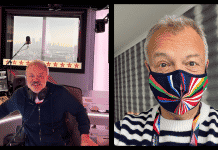