A unique conservation project has been initiated, moving 25 Old Irish goats to rural Dublin to prevent the spread of wildfires.

Throughout the summer months, we have witnessed some scorching weather. This sunshine and heat have been bringing Ireland together again as we balance between restrictions and freedom.

Unfortunately though, careless use of fire by locals and tourists has seen a rise in wildfires throughout Ireland.

In the past few months, several devastating fires have blazed uncontrollably for weeks, destroying acres of grassland across the entire country.

Dublin Fire Brigade crews have worked tirelessly to battle the blazes, alongside the Irish Air Corps. However, it has often proved extremely hard to do so.

In County Kerry, Killarney National Park alone has lost half of its landmass due to wildfire damage. But officials have a solution that could ensure that this never happens again; by bringing Old Irish goats to Dublin.

Fingal County Council has taken part in a conservation project alongside the Old Irish Goat Society. This project has issued 25 Old Irish goats to be relocated from County Mayo to Howth Head in order to control the wildfires.

The problem largely lies in the gorse which grows on the land. It is found in much of rural Ireland, and is dry and catches fire easily.

Along with the dry weather conditions, this vegetation grown significantly, creating more of a risk in starting a fire in the area.

It is hoped that the goats will naturally graze around the area, reducing the risk of natural firebreaks by limiting the growth of the gorse.

This groundbreaking conservation project will see Ireland’s native breed return to the capital for the first time in over 50 years.

Old Irish goats – why are they the secret weapon to fighting fires?

According to RTE News, Melissa Jeuken, the goat’s shepherdess, has spent years tending to the goats.

“The goats are good at scrub control. They love gorse and will graze on it day in, day out if they can,” she explained.

The Old Irish goats are being used as a weapon to save the country from more devastating wildfires through the project. However, there are also hopes that the move will help the species.

Old Irish goats are critically endangered and are in fact the island’s only native animal. It is hoped that this project will help to re-establish the species in the country, saving them from a fate of eventually going extinct.

After the big move – the project’s progress

The 25 goats were introduced in Howth Head just last month. Currently, there are only females and kids in the herd, but male goats will be moved alongside them in the coming weeks.

The scheme is expected to last over three years. Over this period, the goats will be allowed to roam freely, and will be guided towards different grasslands needing attention. 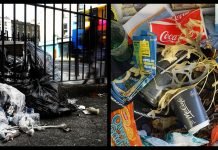