Ball sports have been a definitive part of global culture for centuries, but did you know some of these everyday games could reach lethal levels? These are the ten fastest ball games in the world.

From baseball to tennis, football to golf, little did you know that some of the most seemingly common sports could account for some of the fastest in the world.

In the meantime, however, let us reveal the ten fastest ball games in the world.

This family-friendly game is known around the world, and can also be referred to as ping-pong and whiff-whaff.

It consists of hitting a small ball, back and forth across a net-divided table. Simple, it may sound. However, speeds of up to 116 kilometres (72 miles) have been clocked.

Lacrosse is a hybrid sport which sees elements of ice hockey and bat and ball games. It is a game of speed and stamina, where a goalie defends the goal from the opposing team’s ball.

In this game of fast and loose ball speeds of around 120 kilometres (74 miles) are not uncommon.

This English game comprises of a bat and ball set up. Indeed, it may seem as classic as they come, but it turns out this game is one for the record books!

Speeds of up to 161.3 kilometres (100 miles) have been achieved meaning you wouldn’t want to get in the way of that ball.

Baseball is another bat and ball game which was first played in England and, one of the fastest ball games in the world.

Those with a good arm have been known to swing speeds that would knock your socks off. The fastest throw was of Nolan Ryan in 1974, at 162.4 kilometres (100 miles).

Football is an iconic game played the world over. The objective is simple: get your ball in rival team’s goal.

While people of all ages may play this game, it is one of the fastest ball games in the world. Several sources cite Ronny Heberson in 2006 as the fastest shot of 210.8 kilometres (130 miles).

If your head isn’t spinning out of control, punters may wish to use a bet calculator such as the 10bet football bet calculator tool to find the best odds to help them on their way.

Tennis is a racket sport which consists of hitting a ball over a net to the opposing player. It was first conceived in England between 1859 and 1865.

While this may be seen as an elegant sport, when the gloves come off, it takes a whole new form. Speeds of up to 263.4 kilometres (163 miles) have been recorded during gameplay.

This game takes place in a four-walled court where players hit a small, hollow ball around their surroundings, against an opponent.

While this may sound somewhat simple, squash balls can reach impressive speeds of up to 281.6 kilometres (174 miles).

Jai Alai may be one of the fastest ball games in the world, but it is also known as one of the most lethal.

The game dates back to the 14th century and is a variation of Pelota. This game also clocks speeds over 300 kilometres per hour.

This Spanish sport dates back to the 13th century. Today, it remains a part of the country’s culture and is known as one of the fastest ball games in the world.

Pelota is a court sport which consists of player’s using a hand, racket, bat or basket to hit the ball. Speeds of up to 305 kilometres (190 miles) have been recorded.

Often golf is considered to be a relaxing game, made for people post-retirement. However, did you know it can be an exhilarating sport and one of the fastest ball games in the world?

The fastest golf drive on records stands at 349 kilometres (216 miles) by Ryan Winther in the United States in 2013.

Who are the top contenders for this year’s All-Ireland Football Championship? 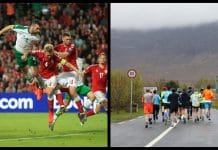