Coming to Ireland and fancy learning the local dialect? Here are 25 funny Irish words and phrases that are used every day across the Emerald Isle

You’ll probably have heard an Irishman enthusiastically saying “top of the morning to ya” on television at some point, but, in reality, we Irish almost never say this in daily life.

There’s a million and more unique Irish phrases out there that aren’t yet known to the world around, so we’re breaking them down for you to understand and use for when you next visit Ireland.

Grand is an adored Irish word used in place of words like ‘good’ or ‘fine’.

Jack: ‘How was work today?’

Niamh: It was grand.’

This means “No problem.” You’d likely say it in response to someone after they’ve asked a question.

This simple Irish slang simply means to go for an ice cream.

Example: ‘It’s a lovely day out there, so I might go for a poke.’

Bit of a weird one, we admit, but it’s used in conversation to exaggerate one’s disbelief at something.

You’d say this if you had been jarred by something or if you received bad news.

Example: ‘Boys a dear, the food in this restaurant is dreadful.’

20. Culchie – come from the countryside

This one refers to a person who comes from the countryside and isn’t accustomed to metropolitan living.

Example: ‘That guy is from Donegal and he’s a big culchie.’

This Irish slang has two meanings and pronunciations. It can mean embarrassed (scundered, in Blefast and elsewhere) or depressed (scunnered, in the Ballymena area).

Example 1: ‘I fell and I was scundered.’

Example 2: ‘Not having a great day, I’m scunnered.’

Example: ‘Stop faffin’ and do some work.’

17. Thon – an Irish phrase for any sentence

Thon simply means “the” or “those” in a sentence and can be used to describe pretty much anything.

Example: ‘Thon shoes would look good on me.’

Calling someone a melter means that they’re so annoying they’re metaphorically “melting” your head.

Example: ‘Oh my god stop talking, you’re such a melter.’

Nope, this one isn’t referring to the Baltic Sea, it’s actually Irish slang for how cold something is.

Thankfully nothing to do with steam coming out of your body. You’d use this Irish phrase to describe how drunk you are.

This is a way of telling someone to shut up and it’s used very informally between friends.

This Irish phrase means to be sick and it’s easy to adopt into your daily dictionary.

Example: ‘That Chinese food was gross; I boked everywhere!’

This word is often squeezed into conversation to humorously refer to someone as lucky.

Colin: ‘I found a 20 euro note on the ground earlier.’

Hello, how are you? This is one of those Irish phrases you’ll hear a lot in Belfast.

8. Buck eejit – one of the funniest Irish phrases

This simply means a silly person.

This is word means ‘disgusting’ – use it wisely.

Example: ‘Those clothes are boggin’.’

You can use this word this slang word to describing something/someone positively.

Example: ‘Those cakes were parful!’

Being described as a yoke means you’re an awesome person, but the word yolk itself can be used however you want.

3. A milly – fake tan and tracksuits

A milly is a term for a female who is typically covered in fake tan and dressed in tracksuits.

2. Catch yourself on – best to wise up

An informal way of telling someone to pull themselves together or wise up.

Mary: ‘Catch yourself on.’

1. Wee – the most popular Irish phrase and slang word

The Irish have a tendency to describe just about everything as “wee.” It’s mostly an endearing way of making conversation sound more informal.

Example: ‘That’ll be 11 euro. Would you like a wee receipt?’

And voila, that’s our top 25 best Irish phrases and slang words. Make sure to start using these expressions regularly if you want to blend in with the locals—with some practice you’ll sound Irish in no time. 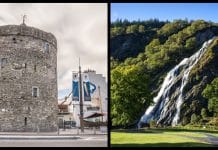 The 10 best things to do in south-east Ireland, RANKED