A Waterford man, John Ahern (33) was sentenced to a six-month prison sentence today after being found guilty of sniffing a class A drug from the Blarney Stone, County Cork.

Judge Rory Sherlock presiding heard evidence that Gardai responded to a silent alarm at Blarney Castle on the night of 2 March last and found Ahern using a twenty euro note to sniff cocaine which he had spread out along the historical Irish landmark.

The Blarney Stone is a block of limestone which is built into the walls of Blarney Castle and is one of Ireland’s most visited sites.

Legend has it that the act of kissing the stone endows the kisser with that unique brand of eloquence known as the “gift of the gab.”

“This is not an isolated incident, Judge,” he said. “We had become aware of a number of Waterford people travelling to Blarney and using the stone to sniff Cocaine from.”

“Our Behavioral Analysis Unit has carried out extensive research and found that as Waterford men, in general, don’t have much luck in chatting up women or getting girlfriends they believe that sniffing Coke from the stone will give them the edge.”

The Detective Sergeant reading from his notes continued, “When we approached the scene we found Ahern Lying on his back with a rolled note stuck up his right nostril. He was quite visibly aroused and suffering from an uncontrollable sneezing fit.”

Ahern’s legal aid solicitor told the Judge that there were mitigating circumstances pertaining to his client’s case.

The Comforts of a Woman

“My Client is in his early-thirties Judge,” he said. “And has never had a girlfriend or for that matter like many Waterford men of his generation has never enjoyed the ‘comforts’ of a woman. He, like many of his peers, needs chemical stimulation to overcome the anxiety of a first date and what follows.

“This is my client’s first offence and as such, I would ask the court to take into account his obvious frustration and his attempts — however misguided — to relieve this frustration.”

In summing up Judge Sherlock told Ahern “While I appreciate your predicament, the sanctity of Cork’s Blarney Stone must be preserved. We can’t allow its properties to be used by all and sundry in an attempt to boost their nonexistent love life.

“I strongly recommend that either Waterford men find their own Blarney stone or else learn how to access adult sites on the internet.”

A spokesperson for the Department of Tourism spoke to reporters outside the Court House.

“The Department is pleased to see such hard sentencing being handed out by the courts. We imply can’t allow the desecration of national monuments and tourist sites to continue especially when the desecration is for sexual gratification purposes.” He said.

“What’s next?” He asked. wedgie tombs instead of wedge Tombs and a whole new meaning to ring-forts?”

Meanwhile in Ireland News since has learned that while on parole Ahern chatted up four women and scored with three of them. It is unclear whether his improved confidence is related to either the Blarney Stone or the use of cocaine. 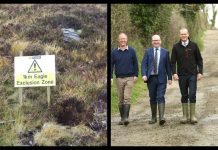