Irish people are a welcoming bunch, but some visitors tend to challenge their friendliness. To avoid offending your new mates, read below what not to do in Ireland.

With millions of visitors every single year, Ireland ranks among the top tourist destinations in Europe – and the Irish are proud to show off their culture and heritage to newcomers flying in from all corners of the world.

Add their reputation for being especially kind, friendly and fun people and you might think that nothing could ever go wrong on your vacation.

However, while we agree with all the above, there’s a few things that really piss every Irish person off. To make sure you won’t offend anyone by accident, check out our list of what not to do in Ireland.

10. Drive on the wrong side of the road – we can’t stress this enough

Rental cars are a great way to explore the Emerald Isle. However, be warned that driving in Ireland might be slightly different from what you are used to at home.

The single one important thing to always remember is that we drive on the left-hand side and pass on the right! Once you have gotten used to it, you will be surprised at how quickly you adapt.

However, since visitors keep being surprised about the steering wheel being on the (what they think) “wrong side”, we can’t stress it enough in our list of what not to do in Ireland: Do NOT drive on the right side!

9. Get in a heated discussion about the civil war – keep it for the history tour

We understand that visitors to Ireland have an interest in “The Troubles” and the civil war. However, unless you are on a designated tour or in a museum, we recommend you better stay out of all things politics and religion.

While the war ended almost a hundred years ago and these days most Catholics and Protestants live together in peace, discussions can still get heated whenever someone raises the topic – especially late at night at the pub. If you sense the tension, change the topic – or start singing a drinking song for distraction.

8. Complain about the weather – straight to your list of what not to do in Ireland

We get it, the unpredictable Irish weather can be a bit of a pain, especially if you are visiting and grave for sunny days to explore the beautiful outdoors.

However, the rain, the storms and the hail in between are something nobody can be blamed for – and it certainly won’t go down well with the Irish if you keep moaning about it.

Obviously, the Irish themselves tend to complain about the weather all day long. But then again, it’s their country and they are kind of allowed to, while whining as an outsider – especially if you arrived in high heels instead of water-proofed shoes – should go straight on your list of what not to do in Ireland.

7. Go looking for leprechauns – part of our culture but not reality

There’s no doubt, leprechauns are part of Irish culture (and a big seller at the souvenir stalls, too) but unless you are at the actual National Leprechaun Museum in Dublin, there really is no need to ask random strangers how to increase your chances to meet one of the bearded fairy men.

The Irish have come to accept that some visitors make it a habit to wearing leprechaun hats whenever out and about in Dublin. An absolute no-go however is to refer to the locals themselves as leprechauns – don’t even think about it!

6. Visit Dublin and declare you have “done” Ireland – go and explore the Emerald Isle

As every Irishman and every Irishwoman will tell you, you haven’t experienced the real Ireland if you spend your whole vacation in the capital.

While, obviously, Dublin with its world-famous sights such as Temple Bar and the Guinness Factory, is where most people will initially set foot on the Emerald, you really should schedule in some extra days to explore the rest of the country. There are plenty of other famous landmarks to add to your bucket list!

Some areas not to be missed are Glendalough, Galway, Killarney National Park, Kerry and the Cliffs of Moher. If you are short on time and really can’t spend more than a day outside of Dublin, hop on the DART and visit one of the nearby sea towns such as Howth, Dalkey or Dun Laoghaire.

We have all met that Brit, American or Australian going on at lengths about his or her great-grandmother or great-great-grandfather from Ireland. However, while we appreciate you showing an interest in the country of your ancestors, one of the things not to do in Ireland is calling yourself “100% Irish” the first time you visit the island.

Your granny might have known someone you happen to meet over a pint at the pub, but that fact alone certainly doesn’t make you Irish.

4. Assume all Irish love Guinness – ­we all have our own preferences

Guinness is the number one booze in Ireland and one of the biggest exports around the globe. However, that doesn’t mean that everyone holding an Irish passport is addicted to the dark brew. There’s plenty of drinks out there and we all have our own preferences.

Think of it that way: assuming every Irish loves Guinness is like saying all Swiss eat cheese, the French are obsessed with frog legs and Austrians yodel all day long.

3. Make fun of the Irish accent – no laughing at the local dialect

One of the first things you will probably notice when arriving in Ireland is the very distinct accent the locals sport. While it might at times be a bit of a challenge to understand them, never ever make the mistake to play down your own struggles by blaming the Irish for it.

Making fun of their accent and trying to imitate it are absolute no-no’s for tourists when dealing with the locals. We sometimes think this should go without saying but since we keep bumping into visitors considering jokes about our lingo to be fun, we ask you to make a mental note on your “what not to do in Ireland” check-list.

Pubs are the heart of Irish social life, so make sure you don’t miss out on the chance to mingle with the locals in their natural habitat. However, if you want to fit in (and you do – why else would you go there in the first place?), one of the most important dos and don’ts in Ireland applies to pub etiquette.

If someone buys you a drink, you are obligated to buy them one in return! Don’t be greedy on this one or you might seriously offend that nice guy or gal you have just met. Obviously, when buying rounds, you might end up spending a lot more time (and money) at the pub than you had originally intended.

Take it easy! Whatever the consequences – you might have missed a flight, a play or a date or will have to live off pasta for the rest of the week – we guarantee the craic is worth it!

1. Call Ireland part of the British Isles – an absolute no-go in Ireland

The single biggest faux pas you can make as a visitor is to refer to Ireland as part of the United Kingdom. While both countries share the language, the driving habits (see number 10), the love for football and water holes, among many other things, Ireland has been an independent nation since 1922.

The Irish have a lot-hate-relationship with their big neighbour, and they are very proud of their own flag and rules. So, if you remember just one of the things not to say in Ireland EVER, make sure it’s this one! 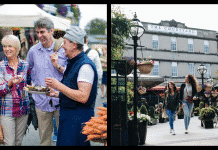